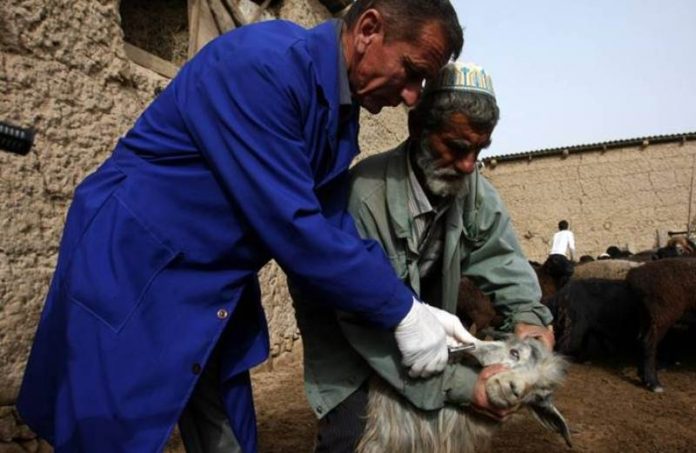 In parts of Asia, where animal transport often happens quickly through unregulated and remote border areas, animal diseases are especially difficult to control.

Because of this, and because livestock play a major role in economic growth in the region, it is important to address animal diseases that have the potential to impact livelihoods throughout Central, Southern and Western Asia.

That’s the message this week from the FAO, which is hosting a meeting on transboundary animal diseases on 27–28 June in Istanbul.

Attending the meeting are chief veterinary officers and other experts from the governments of Afghanistan, Iran, Pakistan, Tajikistan and Uzbekistan. FAO in Afghanistan is hosting this meeting as part of an ongoing series of regional meetings on animal health issues, all funded by the Government of Japan. It is the second multilateral meeting on transboundary animal diseases in the Central/Southern/Western Asia region.

FAO and its partners recognize that today is a critical time to address transboundary animal diseases, and this unique multilateral meeting is a sign of strong regional commitment to this issue.

“The FAO Subregional Office for Central Asia is very pleased to be part of this collaborative effort on ways of controlling transboundary animal diseases,” said Viorel Gutu, FAO Subregional Coordinator for Central Asia and FAO Representative in Turkey. “Events that bring together experts in Central Asia with their colleagues from neighbouring countries are vital for developing more robust channels of communication on livestock prospects and food security in the region.”

Diseases like foot-and-mouth disease, which affects cattle, and peste des petits ruminants (pest of small ruminants), which affects sheep and goats, are extremely prevalent in Central, Southern and Western Asia. When they strike, they can have devastating impacts on peoples’ lives and national economies. If peste des petits ruminants isn’t controlled quickly in such places, for example, it can easily wipe out a small-scale pastoralists’ flock of sheep, causing food insufficiency and forcing already poor families deeper into poverty.

“One of the things that makes this meeting so unique is that it is using science for diplomacy – an important but infrequently used method of international peace-building,” said Tomio Shichiri, FAO Representative in Afghanistan. “By creating bridges between scientific experts on an issue that is important for economic and national security for all of the participating nations, we can not only tackle a food security issue, but we can help bring peace and stability to a region that is very much in need of it.”

Shichiri is the meeting’s keynote speaker.

“We appreciate the support of the Government of Japan in supporting this meeting,” he said. “Together, we can build resilience against climate-related and other shocks to animal health by coordinating between the countries where these animals freely travel.”

This two-day multilateral meeting has been organized jointly by the FAO Representations in Turkey and Afghanistan, in close collaboration with the Ministry of Agriculture, Irrigation and Livestock of the Government of Afghanistan. The meeting is additionally supported by the veterinary organizations of the governments of Iran, Pakistan, Tajikistan and Uzbekistan. It is part of a wider effort that FAO is supporting globally to improve the prevention of transboundary animal and animal-related human diseases.