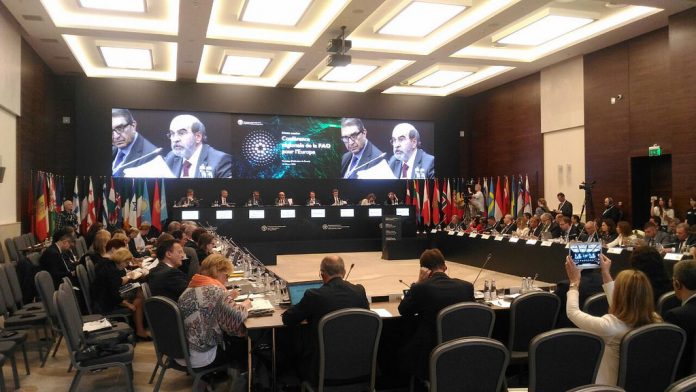 The region “has made substantial progress” in reducing undernourishment over the last years, “but in some countries hunger is still a major concern,” Graziano da Silva said, at the opening of FAO’s Regional Conference for Europe and Central Asia, which is being attended by ministers and other top officials from 42 countries.

“Persistent malnutrition and rural poverty in Europe and Central Asia call for still greater efforts if we are to achieve Zero Hunger by 2030,” the FAO Director-General told Conference participants.

Hunger increased in the world in 2016, after more than 10 years of decline and preliminary data indicate that there has also been a further increase in the prevalence of undernourishment in 2017, Graziano da Silva said.

He pointed to recent FAO figures that show that 14 million people in the Europe and Central Asia region, mostly in rural areas, are still facing food insecurity. Among the worst affected are Tajikistan where 30 percent of the population is undernourished, Moldova (8.5 percent), Georgia (7 percent), Kyrgyzstan (6.4 percent) and Uzbekistan (6.3 percent).

Graziano da Silva particularly underscored the importance of FAO’s work in the region on empowering smallholders and family farmers for poverty reduction and on sustainable natural resource management under conditions of climate change.

The current global epidemic of overweight and obesity which is driven by an overconsumption of processed foods high in salt and sugars, is also affecting Europe and Central Asia, Graziano da Silva said, citing Malta, Turkey and the United Kingdom where some 29 percent of the population are obese.

“Countries need to tackle this situation by stimulating healthy diets. National public policies are fundamental, nutrition is a public issue, a State responsibility,” he said, stressing the importance of nutrition education, awareness raising, as well as regulations on labelling and advertisements.

With climate change “one of the major obstacles in achieving sustainable development,” Graziano da Silva pointed to the “utmost importance to promote the adaptation of food systems, especially in relation to poor rural communities.”

He noted that the Green Climate Fund, is one of the most important mechanisms now available to finance developing countries’ response to climate change, Graziano da Silva said.

FAO is working closely with a wide range of countries around the world that have formally requested the Organization’s assistance to prepare projects to be submitted to the Green Climate Fund.

Graziano da Silva stressed that FAO is committed to exploring all approaches to put forward food systems that can provide accessible and healthy food for all while respecting the environment and biodiversity.

The FAO Director-General welcomed the different actions in Europe to combat food waste and loss, such as food bank initiatives, and called for urgently reducing food waste. He stressed that avoiding food waste could have positive effects on preserving land and other natural resources, in particular water.

Graziano da Silva stressed to the Conference participants that FAO’s highest objective is to support Member States in achieving the SDG 2 on ending hunger and all forms of malnutrition, and promoting sustainable agricultural development.