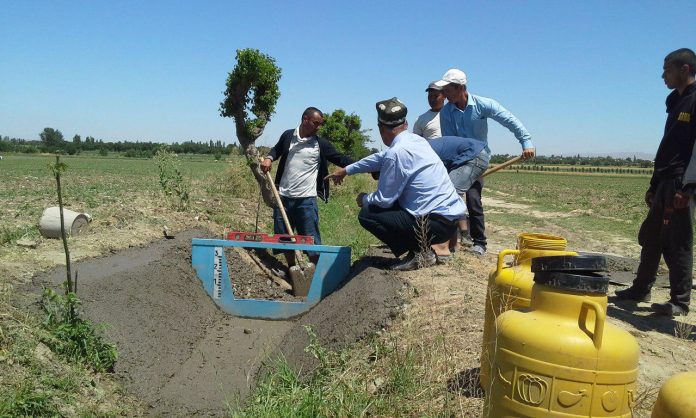 Since the independence of Tajikistan, almost three decades have passed since the first collective-farm system (USSR agricultural system) broke up.

The agricultural world in all developed countries has stepped far forward. However, some Tajik (Tajikistan is a Central Asian country) agricultural farmers are still afraid of innovations in this system and refuse to introduce any innovations on their land plots. The reason for this attitude is that Tajik farmers have been accustomed to a single working regime for decades. Innovations of the twenty-first century, in their opinion, will lead their farms economy to losses.

Abdusamad Abduvohidov is the famous farmer from Babajan Gafurov district of Northern Tajikistan. He is a chairman of the Water Users Association (WUA) “Bogparvar” which has 56 members and about 570 hectares of land. Three years ago, he was supporting conservative farming attitudes and had a critical view of any innovations. No one could convince him to introduce new mechanisms for growing fruits and vegetables on his lands. Also, he was against the idea of introducing new irrigation systems. 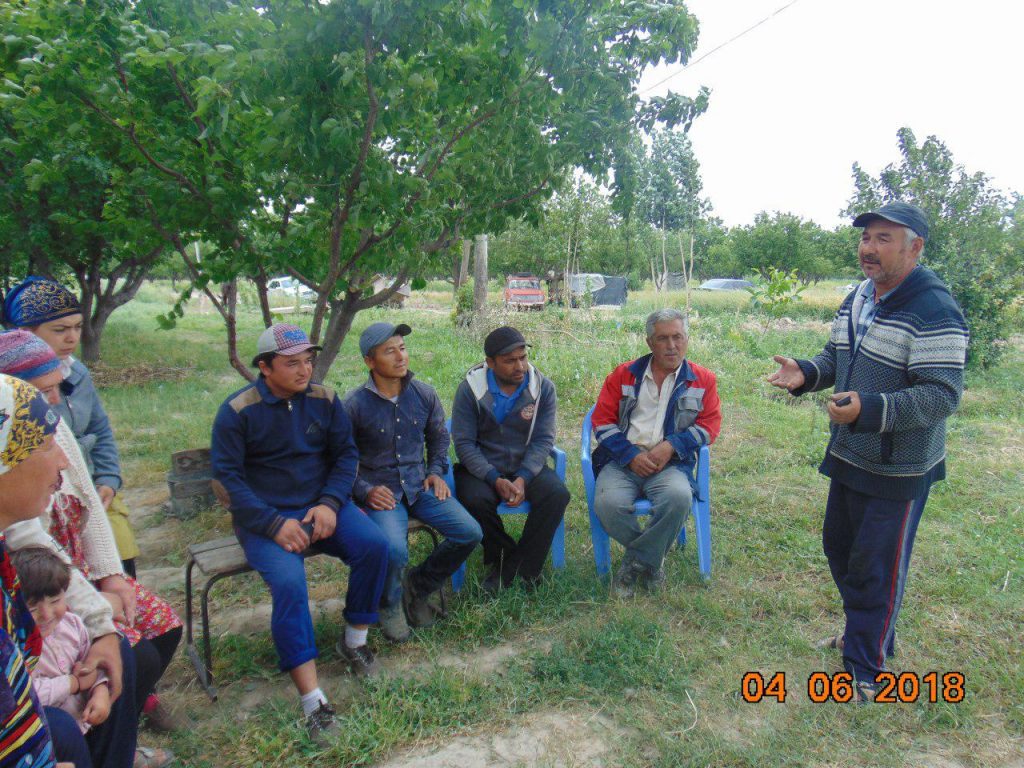 “When specialists from the Public Organization ‘Neksigol Mushovir’ came and told me about the new project, the introduction of the new irrigation system, I had doubts. I did not see prospects in their plans today I realized that I was very wrong. In fact, ‘Neksigol Mushovir’ has awakened us from a deep sleep!” – Abdusamad Abduvohidov

In 2016, according to the terms of reference, public organizations like “Neksigol Mushovir” (NM) began implementing the components of the new National Project on water resources management in the Sughd region (North of Tajikistan). NM is a small public organization assisting dozens of small and medium enterprises engaged in agribusiness and thousands of farmers in Tajikistan to increase their profitability, improve the quality and introduce innovative technologies in the production, processing and marketing of agricultural products.

The mission of NM is to contribute to the development of the agricultural sector in Tajikistan and reduce poverty among the rural population of the country by means of increasing the sustainable income of agricultural producers. In 2018, the number of NM’s beneficiaries has reached more than 20,000 farmers and about 40 small and medium-sized agricultural enterprises.

The project’s activities were aimed at strengthening the management of water saving. The main goal was: 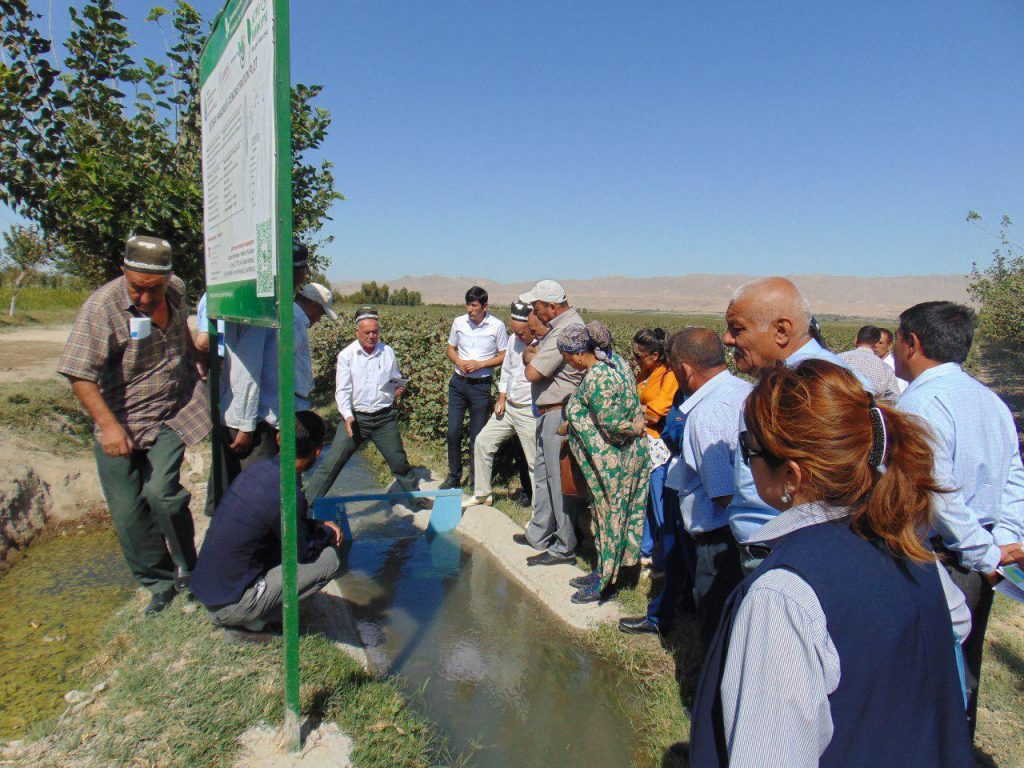 “During the analysis in these districts, our specialists identified the following problems: depletion and failure of irrigation facilities; destruction of concrete channels that caused the loss of water during irrigation; the clogging of clay and mud channels and creek farms; deterioration of water pipes; lack of tools and equipment for water supply and measurement; low level of knowledge and skills of water users. Our activities were aimed at solving these problems, and as far as possible we have achieved significant results” – said Akmal Nasrulloev

After the restructuring of the agricultural sector in Tajikistan (1998 after the civil war), the land was distributed among different layers of the society. Teachers, doctors, businessmen and others who did not have enough basic knowledge of agriculture started their farming and other agricultural activities.

In the framework of the new project NM created demonstration plots in 29 WUAs and trained 29 FFS trainers. The trainers conducted training for small farm holders – dehkans about modern irrigation methods, irrigation regime, methods for improving soil fertility, etc. Water-saving technologies and instruments for measuring water were installed at the demo sites to show the effectiveness of new technologies in the productive use of water.

“Water is the blood of the Earth and water regulators – mirobs are regulating the movement of this blood. They regulate the distribution of water to farmers in timely, quantity and the queue. They also help in setting and counting the amount of used water. If there is no hydra technique specialist and water regulator, the proper separation of water is disturbed and dehkans will probably deal with each other, throwing hoes during irrigation season. It would be good if every new small farm holder that is being created today, in addition to agronomists, collaborated with hydraulic engineers and water regulators. These are two very important professions in agriculture” – says a specialist from NM.

Today Abdusamad Abduvakhidov works as a trainer from this Project in the farmer field schools. With NM support he organized several demonstration plots in WUA “Bogparvar” in Babadjan Gafurov district. For example, an area of one hectare was irrigated on short furrows. This method also helps fruitful use of water.

“The furrows in our cotton farms are very long and earlier the water did not reach the end. This was the reason for the loss of the cotton crop. After the introduction of irrigation on short furrows, the cotton got the necessary water at a certain time” – says Abdusamad.

For young trees, a drip irrigation system was installed. “The pipes of the canal irrigated by machine have long been worn out. The trees were at the stage of drought. NM the small organization with big projects gave trees a second life. In addition, we dug a reservoir. If we had implemented this technology with our own means, for 10 acres of land we would have spent at least six hundred US dollars. In order to collect so much money, we would go through dozens of disputes and disagreements, and emotional stress. We saved not only money but also time and nerves. I am very glad to cooperate with Neksigol Mushovir” – added Abdusamad.

As part of the implementation of the “National Water Resources Management Project”, the organization provided advice and enhanced the knowledge and skills of targeted farmers. According to the results of two-year activity, today farmers – dehkans can calculate the amount of water used after installing water-measuring devices and practical research. They also got the opportunity to determine the duration of irrigation and the volume of water using soil moisture meters, which were also provided by the project. These technologies of saving water have reduced the costs of dehkans up to 20%. 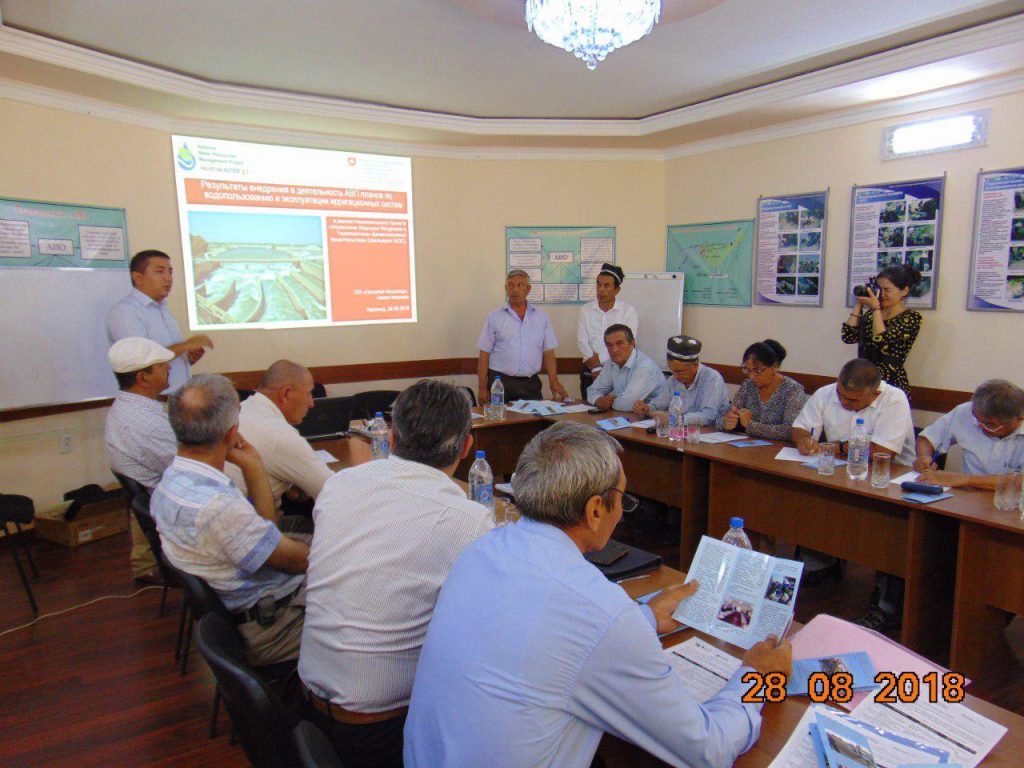 “I advise everyone who wants to engage in farming to cooperate with small organizations.  They have no useless bits of advice. In the beginning, it seems ridiculous, but later you regret that you met them too late. Do you plan your farm’s works? Do you know your benefits, profits or loss from farming? NM specialists will teach you all of this. Now I even agree to introduce some things at my own expense” – Abdusamad Abduvakhidov

During the last three years the Government of Tajikistan, in cooperation with development partners, has launched 17 state investment projects of water supply in the amount of 255,000 US dollars. To this day, 50% of them have already been implemented. Separately, in the field of agriculture and land irrigation, 35 projects are being implemented for a total amount of 570,000 US dollars.

NM holds all its activities in cooperation with representatives of local and state bodies, regional departments of the Ministry of Agriculture of the Republic of Tajikistan. Because, to increase harvest and access to water savings in each locality is a good result not only for the “National Water Management Project”, but also for the whole country.

Today, 29 demonstration plots are assigned to the farmers. Dehkans can always get advice from trainers on water-saving technologies and methods for measuring water using with water meters. The sustainability of the Project also consists in trained specialists and local personnel, water regulators, hydro technicians and special trainers in three districts and 29 WUAs who are ready to serve farmers in their region every day.