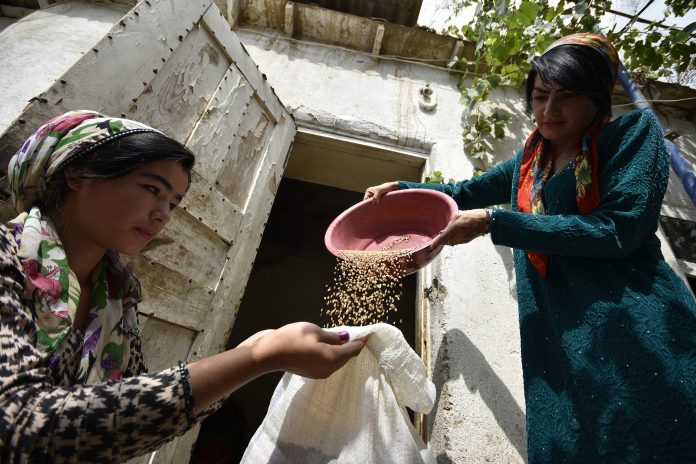 Wheat has a long history in Tajikistan; it has been grown here for more than a thousand years. The crop plays a crucial role in people’s well-being, particularly in rural areas.

With a workshop today in Dushanbe, a successful effort to improve small-scale farmers’ access to high-quality seeds concludes. It was implemented by the Food and Agriculture Organization of the United Nations (FAO) and funded by Austria. This project, launched in 2012, was supported by the Ministry of Agriculture and the Seed Association of Tajikistan.

Participants at today’s closing event included beneficiary farmers and representatives of the Parliament of Tajikistan, the Ministry of Agriculture, Tajik Academy of Agricultural Sciences, Agrarian University of Tajikistan, the Seed Association of Tajikistan, and the Cooperative “Sarob.” During the event, they shared information not only on challenges and lessons learned, but also on positive experiences, success stories, and goals achieved.

“The project was very timely, and it successfully combined distribution of practical and theoretical assistance,” said Oleg Guchgeldiyev, FAO Representative in Tajikistan. “Not only did it distribute seeds of wheat and other crops, along with equipment for seed cleaning, but it also provided training to farmers on how to produce high-quality seeds by themselves.”

Almost all wheat produced in Tajikistan is used for making bread and other food. Therefore, it is a highly respected staple grain for Tajik people, who make various types of bread – for example girdacha, fatir, kulcha, chapoti and others – in different shapes and with various ingredients. Besides wheat, Tajik farmers also grow pulses, oilseeds, forage crops, rice and other crops.

From 2012 to 2018, the project distributed more than 400 tonnes of high-quality wheat seeds and almost 15 tonnes of seeds of alternative crops. Most importantly, the project established a strong partnership among seed producers and seed users through the demonstration of new, superior wheat varieties. New wheat varieties (Murodi, Durakhshon, Kamol) were released, and an additional seven are being tested by official authorities at multiple locations. Local varieties (Sarvar, Yusufi, Vakhdat, Durakhshon) have been preserved.

In total, some 2 800 to 4 000 farmers in 15 districts of Tajikistan – located in the Khatlon and Sughd regions and in the Rasht and Hisor valleys – benefited directly or indirectly from this project. Among the project’s many activities were trainings for farmers and seed specialists, the distribution of equipment, wheat breeding and maintenance activities, the production of publications and extension services materials, and the development of policies and strategies.

To ensure that small-scale farmers can produce high-quality seeds that meet all requirements, the project provided them with seed-cleaning machines.

The machines are important for long-term sustainability, Guchgeldiyev said, in that they’ll help farmers reduce their dependence on project and donor support. Access to high-quality seeds of superior wheat varieties and other crops can ensure employment opportunities and income generation, and, ultimately, contribute to improved food safety and livelihoods for small-scale farmers living in rural areas of Tajikistan.

“Small-scale farmers now have the skill of producing quality seeds, and, as a result, they have realized that planting quality seeds results in increasing yields,” said FAO agricultural officer Hafiz Muminjanov. “In this regard, the project team has convinced farmers that quality seed costs more, but it pays off.”

Farmers – and the country as a whole – already are beginning to reap the benefits, he said.